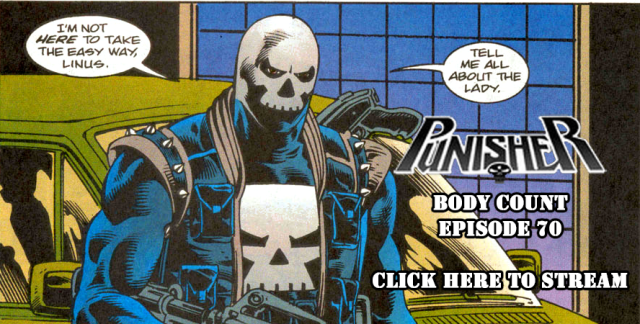 Let’s have some chuckles and get ready for the end of Thunderbolts and the beginning of a new Christmas tradition, which is announced in the news section!

Introduction – Jake gives some insights on how to leave a job with grace, and I talk about how my father ruined Halloween.

[19:49] News – We pat ourselves on the back with some Facebook numbers, talk about some news on the upcoming Daredevil tv show, and also discuss the upcoming cancellation and imminent revival of the Punisher comic. Also at the end: A new Christmas event, involving YOUR artwork!

[37:00] Mail Call – We have a voice mail from Wyatt, talk about Punisher and credible crossovers, and then talk about a kinder, more sociable, Frank.

[1:44:50] Discharge Papers – Jake recommends you watch the Van Damme movie Six Bullets on Netflix and I recommend you give CW’s The Flash a shot.

A guy who loves comics.
View all posts by Dane →
This entry was posted in Podcasts. Bookmark the permalink.