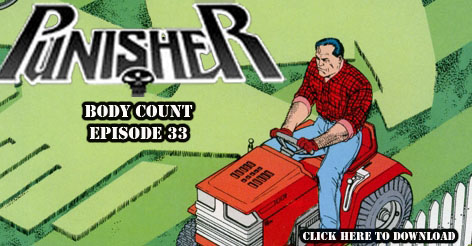 Happy Hannukkah, we’re back and we’re front-loaded with content!

Introduction – Jake discusses how he killed a mouse and I explain why I’m on the outs with my pregnant sister, which led to a million dollar idea!

Mail Call – Gill (we called you Bill, sorry man!) gives us a call to back me in my tipping policy, and Jake quickly ruins everything.  Later on, we recount the gifts a listener sent us! Blackstone asks us if we finally watched Dredd 3-D. We also give our opinions on how we feel Untold Tales of the Punisher could have been better.  Finally, talk about the Punisher’s upcoming role in Iron Man: Rise of the Technomancer, and if it has a chance of spinning off into his own animated feature.

NEW CONTEST – Listener and Frank’s Salad Days blog writer Arch Stanton is sponsoring a new contest for the show! The instructions are as follows:

1.  Make a guess on the total on-screen kill count the Punisher had for all three movies combined.

2.  Send in that number to us via email, voice mail, or simply post it under this message in the Punisher: Body Count fan page.

3.  At the end of our next show, we’ll announce the winner.

4.  The one who comes closest will win a Marvel Legends action figure!

Jake and Dane’s Christmas Gift Advice Segment – Jake and I do your Christmas shopping for you by telling you what Punisher-related gifts are hot this season!

Bullet Points – We cover Fury: My War Gone By #7, Rucka’s Punisher: War Zone #2, ad Thunderbolts #1. Thunderbolts was better than expected toward Frank, but there’s still something missing in it, which I bring up during our review.

Flashbacks – By listener request, we cover Dan Abnett and Andy Lanning’s Punisher: War Zone #12-16, which is the “Psychoville” story arc.

Discharge Papers – I recommend IDW’s Rocketeer and the Cargo of Doom and the Walking Dead, and Jake goes into a rant about how much he hates movie theaters these days.

A guy who loves comics.
View all posts by Dane →
This entry was posted in Uncategorized. Bookmark the permalink.