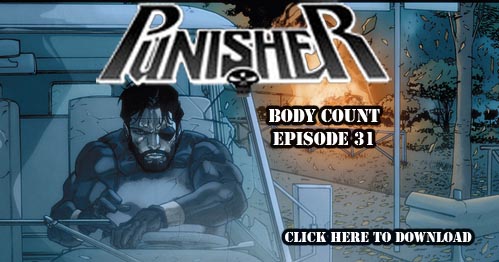 Happy Halloween, everyone!  Let’s get into it.

Introduction – I talk about the emotional wreck I became when I got my wisdom teeth removed and Jake explains a new dangerous hobby he’s taken up. I also explain why I left a comedy club in Atlantic City.

Mail Call – Blackstone asks us if we’d ever go after some Punisher-like Marvel characters if we ever run out of present-day material, and then we go into a tangent about My Little Pony.  I am so sorry.

Bullet Points – We cover Untold Tales #5 and SPACE: Punisher #4. Both are awful in their own special ways.

Flashbacks – Did you know the Punisher was an avenging angel back in the mid-nineties? For about five minutes? Come join us as we explore the comic series that killed the franchise until Garth Ennis and Steve Dillon were brought in.

Discharge Papers – I recommend two podcasts:  Dan Carlin’s Hardcore History and My Brother, My Brother, and Me.  Jacob changes his view on the movie Akira and recommends Domu: A Child’s Dream by the same creator.

A guy who loves comics.
View all posts by Dane →
This entry was posted in Uncategorized. Bookmark the permalink.